Home/Doggone Blog, Dogs in the Media/Kimberly Honored With Points of Light Award
Previous 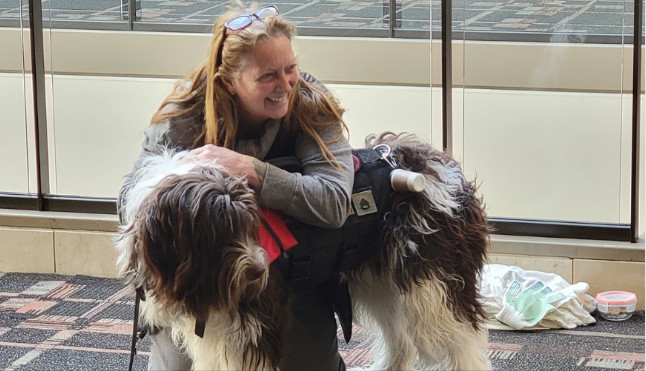 As a leukemia survivor who sustained a brain hemorrhage and stroke due to cancer treatment, Kevin Biacsi suffers from debilitating seizures on average three times a week. Only able to go outside accompanied by a friend, Kevin’s seizures and other neurological issues confined him to his home for many years.

But in 2019, a chocolate lab puppy named Charlie entered Kevin’s life and changed it forever. See, Charlie isn’t a regular dog. He was matched with Kevin through an organization called Paws for Life USA, a nonprofit founded by Kimberly Brenowitz of Marietta, Georgia. After finding Kevin’s perfect match, Kimberly trained Charlie and Kevin at the same time to become a strongly bonded service dog and handler duo so that when Kevin was about to have a seizure, Charlie could help him.

Charlie alerts me 20 minutes before I have a seizure. When he does, I take my medication, drop onto the floor, and Charlie stays on top of me to make sure I don’t hurt myself during the seizure,” Kevin said.

“Now I can go places and if I start acting up, people will see that I have my dog to help me. He’s made my life so much easier and there’s also that bond we’ve created. We’ve never been apart,” he added.

Kevin is just one of the hundreds of people with disabilities Kimberly has helped lead more independent lives by providing them with a service dog that best suits their lifestyle and physical needs. Through Paws for Life USA, Kimberly has matched between 20-30 service dog teams each year since 2010, mainly for those with disabilities that are not immediately apparent such as autism, diabetes, PTSD, seizures and psychiatric disorders.

“I like to work with ‘unseen’ disabilities because when most people think of a service dog, they think of someone who is blind,” Kimberly said. “But for someone who has seizures or diabetes, dogs are an ultimate choice because they can smell and sense everything that’s going on with them. It’s fascinating and I am thrilled to be able to volunteer to train these dogs to make these people’s lives better.”

Unlike most service dog programs that match a person with a service or therapy dog that’s already been trained and ready to go, Kimberly matches people with an untrained puppy. Once the match is made, the handler and puppy will train with Kimberly together, starting at basic obedience lessons all the way up to learning skills needed for that specific disability and testing them out in public spaces such as the mall and airport. By having the handler raise the puppy and train together, Kimberly says it creates an unbreakable bond that often creates miraculous results.

“A story that will stay with me for the rest of my life is when I met this young National Guard, 19 or 20-years-old at the time, who had been in a motorcycle accident. 80% of his body had been covered in burns and the doctors thought he was going to have to lose his legs,” Kimberly recalled.

With the prognosis that he would be in a wheelchair for the rest of his life, Kimberly matched him with a Native American Indian dog, a highly intelligent breed that can be trained to pull wheelchairs and open doors, among other tasks.

Kimberly and the dog went to the hospital and worked with the young man through his therapies. Soon enough, the man was able to pull himself out of bed and he became determined to walk again.

“Within a short amount of time, he actually ended up walking out of the hospital with his service dog by his side,” Kimberly said. “Now he can run up and down Stone Mountain. He’s 22 years old and his whole life has been changed with the intervention of having a service animal.”

What Kimberly does is no doubt exhausting work. She trains handlers and their dogs every day in both group and one-on-one settings. She makes herself available 24/7 for any questions or emergencies that arise. She works with dog breeders to find puppies that have the temperament to become good service dogs. It’s never-ending work, but Kimberly says it’s all worth it.

“It’s a wonderful ability to be able to help so many and to see the end result of people living their lives, going to work and being able to have all these achievements,” Kimberly said. “It’s a hard road to get them there, but I love volunteering with the dogs to help people gain that independence.”

Do you want to make a difference in your community like Kimberly? Find local volunteer opportunities.